A NEW WAY TO JUICE: MEET THE NAMA J2

OUR NEWEST JUICER SAVES TIME IN THE KITCHEN

LEARN ABOUT OUR NAMA VITALITY 5800 JUICER 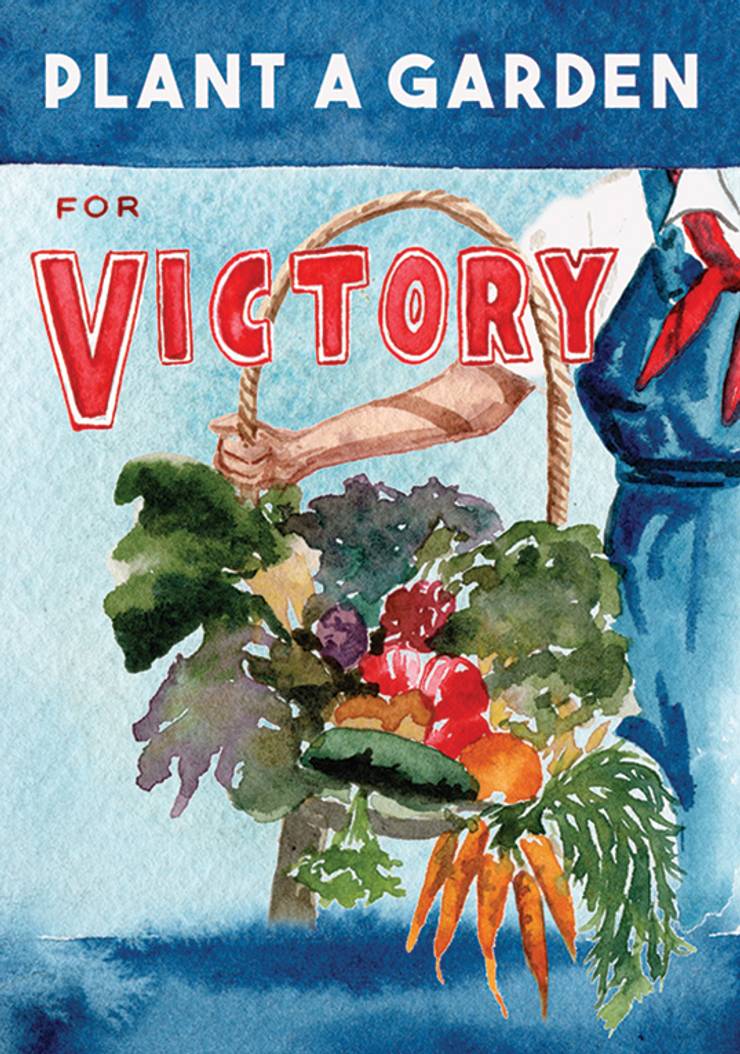 When coronavirus pandemic shelter-in-place orders and grocery store shelves looked empty, home gardens had a massive comeback, like the victory gardens from the 1940s. This year, gardens are still going strong. Learn more about the movement, the benefits of gardening for our bodies and souls, and how green thumbs and newbies alike are looking to grow more veggies this season.

Claudia Alta “Lady Bird” Johnson, first lady and wife of Lyndon B. Johnson, once said, “Where flowers bloom so does hope.

Perhaps, this sentiment is what brought so many folks back to their gardens in the last year—to get their hands back in the dirt and commune with nature during a tough time.

As pandemic lockdowns set in, gardens had a major comeback, reminiscent of the victory gardens from the 1940s. It was such a resurgence it was called the “rejuvenated victory garden movement.”

About 64 percent, or an estimated two-thirds of U.S. adults said they took up gardening as a hobby during the pandemic.1 U.S. seed company Burpee sold more seed packets last spring than at any time during its 144-year history.2

Many other garden stores and seed suppliers sold out of fruit and vegetable plants, as home gardeners started looking at the soil in their backyard as a fertile place once again.

It’s not the first time we’ve seen people turn to gardens in times of struggle.

In 1917, during World War I, the U.S. government called on citizens to grow “war gardens” to free up food for soldiers fighting overseas. In the 1940s, during World War II, a new name emerged for the same concept. Cans of fruits and vegetables were rationed so The Department of Agriculture encouraged citizens to grow food for “victory” in their own backyards by creating informational pamphlets and posters and running ads in articles in magazines and newspapers. It was essentially a response to a food shortage.

The campaign was successful, and more than 18 million victory gardens sprouted up in cities, suburbia, and the countryside, producing almost 40 percent of the nation’s fruits and vegetables at that time.3 It’s estimated that up to 10 million tons of vegetables were grown.4

“Every available space was used,” according to the Old Farmer’s Almanac. “Onions sprouted from flowerbeds, temporary raised beds were created, and victory gardens sprang up in city parks, on roof tops, in backyards, and within the suburbs.”5

In fact, the Fenway gardens encompasses more than 500 gardens spanning 7.5 acres, which are tended by a community of more than 475 members from every neighborhood in Boston. They are the only victory garden to have continued operation in the same location, as it was during that time.

One note on victory gardens of the past: While the movement felt patriotic, many scholars also discuss how the movement also served a void when 120,000 Japanese Americans, many adept farmers, were rounded up and imprisoned in 1942.7

According to archives available at the Museum of the City of San Francisco:

“Nobumitsu Takahashi, agricultural coordinator for the Japanese-American Citizens League, warned, as internment began in 1942, that removal of the Japanese would disrupt the California vegetable industry. Japanese truck farmers, he said, produced crops valued at 40 million dollars annually and interned Japanese ‘stand to lose approximately 100 million dollars in investments’ because of confiscation or forced sale by the U.S. Government.

The California Farm Bureau was quoted by The News, saying that Japanese farmers were responsible for 40 percent of all vegetables grown in the state, including nearly 100 percent of all tomatoes, celery, strawberries and peppers.”8

But also, gardens have a benefit to the soul that’s not easily quantified.

As Jennifer Atkinson writes in her book Gardenland: Nature, Fantasy and Everyday Practice,9 “Indeed the reason for gardening’s popularity are not always self-evident. Practical considerations alone can rarely account for growers’ extraordinary effort; as countless gardeners will attest, it is far easier to just buy that onion at the supermarket, bypassing the whole ordeal of back-straining work, unanticipated costs, muddy knees and dirty nails, the ruinous effects of bad weather and bugs—and in the end, the uncertainty of success.”

In addition to providing nutrient-rich foods for the table, gardening also has health benefits such as helping to reduce risk of developing dementia,10 the ability to boost your mood, and can even shrinking your BMI.12

For families, planting vegetables with kids can be a great way to help younger generations understand where food comes from and enjoy the benefits of eating from fresh-grown ingredients.

Gardening has become a way to offset the stress of life during pandemic times. Tending to a garden has positive effects on our well-being, whether it’s in your backyard or at a community space.

This year, seed suppliers are more prepared for the gardening boon.

Baker Creek Heirloom Seed Company, based in Mansfield, Missouri, offers one of the largest selections of heirloom seeds from Europe and Asia, mailed its annual seed catalog to more than 1 million customers this year, thanks to renewed interest in gardening.

The mission of Baker Creek is “to provide the seeds of a sustainable food supply for everyone and keep heirloom varieties alive for future generations.”14

Sales have surpassed two to three times their regular volume in the last year with some varieties selling out in just weeks. They have since worked to rebuild supplies and feel prepared for another busy season in 2021.

“2020—What a year!” wrote Baker Creek founder Jere Gettle in the company’s catalog. “It was overwhelming not only for the country and the planet, but also for the garden seed industry. The huge volume of orders is continuing as we approach 2021. It always seems that in turbulent times people turn to their gardens for food and flowers, and of course a healthy dose of sunshine and exercise.”15

Native Seeds/SEARCH (NS/S) is a nonprofit seed conservation organization based in Tucson, Arizona, with a mission “to conserve and promote the arid-adapted crop diversity of the Southwest in support of sustainable farming and food security.”16

The organization also saw a dramatic increase in seed demand, says Dr. Andrea Carter, outreach agronomist who serves as a link between the NS/S seed bank and small-scale farmers across the Southwest. “We not only sell seeds through our retail outlets, which is now an online store, but we have the Native American free seed request program, which provides 10 free seed packets to Native American individuals and households once a year,” she said. “We saw an increase in that, which is great.”

“In times of uncertainty we really focus on what matters, what’s essential, so I think that’s the root of it,” she said. “We came back to this idea that we should do this thing that we all used to do, which is grow our own food”

When I asked Dr. Andrea about lessons learned from the pandemic on food security and sustainability, she said, “We were in this really precarious situation as a society and had to face the realities of limitation and restriction.”

I talked with her about what those rediscovering gardening through pandemic gardens can learn from traditional agriculture.

“These ideas of regenerative agriculture, agroecology, and sustainable agriculture, they're all rooted in traditional practices of growing food,” she said. “These are not new concepts—taking care of the land, being good stewards, or making the land better through your presence. These are part of traditional ways of thinking and being. As we are getting on that train, it’s good to recognize it’s not an invention of the wheel.”

One tip she had for newbie gardeners is to consider growing adapted varieties in your garden.

“For example, in the Southwest, a lot of folks try to grow beefsteak tomatoes, and then they fail,” she shared. “They get upset and feel like they can’t garden or that our growing conditions are terrible out here. And it is hot, and it is dry, but there are varieties that can grow in the heat with less water.”

She encouraged all gardeners to grow crops adopted to your location, and to know that they exist.

“We can’t always have it all, but we can have what does well,” she said.

Once you find what works, you can also create a fruitful garden by saving seeds for the next year.

“By growing and saving the seeds, you are adapting and growing plants to fit the micro-conditions in your garden, into the particulars of your soil and climate,” she said.

Finally, when it comes to traditional practices, you might be able to get more tips and resources from an elder in your family or community.

“We don’t have to go too far back in our heritage, most likely your grandparents or someone in the family had a garden,” she said.

For more tips, check our Baker Creek’s Growing Guide, where you can get specific tips for planting and growing on a large variety of fruits and vegetables or Sierra Club’s 9 Ways to Get Your Pandemic Victory Garden Off The Ground.

See additional articles on soil as part of our earth 2021 article series:
Soil Part 1: How Soil Impacts Our Health—and the Health of Our Planet
Soil Part 2: A Farming System Focused on Healing
Soil Part 3: Home Remedies for Soil Health

Suzanne Boothby is a writer, coach and author, most recently working with Erin Brockovich on Superman's Not Coming: Our National Water Crisis & What We the People Can Do About It. She is the executive editor of The Brockovich Report, a newsletter for those ready to get out of this mess, talking about the national water crisis, toxic chemicals and other problems in your backyard.

As a wellness coach for Camp Reboot, she facilitated groups through a 5-day juicing extravaganza at Omega Institute with Joe Cross, the filmmaker behind the hit documentary, Fat, Sick & Nearly Dead. She earned her health coaching certification from the Institute for Integrative Nutrition in 2007 and has a Juicing Certification from Reboot with Joe. She is a proud alum of the Medill School of Journalism at Northwestern University. Learn more at www.suzanneboothby.com.